To share your memory on the wall of Oleta Moler, sign in using one of the following options:

Oleta was born to the late Melda and Raymond L. Babcock, April 27, 1935, in Mutual, Oklahoma. Early in childhood, Oleta’s family moved to Alva, Oklahoma, where she attended grammar school and then later moved to Ponca City where she graduated high school.

She married the late William J. Moler, May 15, 1954, in Culver City, California before returning to Oklahoma later that year to raise their family. Oleta is survived by five children: Catherine Asmussen (Mark) of West Monroe, LA, Theresa Abernathy (David) of St. Louis, Roberta Moler-Mitchell of Stillwater, Robert Moler (Nicole) of Dallas, and William R. Moler (Amy) of Kansas City, along with 18 grandchildren and 15 great-grandchildren. Oleta was predeceased by her loving husband of 64 years in July of 2018.

Oleta was not only a loving wife and mother but she also a Human Resources professional working for Mercruiser until retirement in 1989. She loved to serve God and her community. Oleta jointly-led weekly bible study groups in her home with her husband, Deacon Bill. She was a member of St. Francis Xavier Alter Society at St. Francis Xavier Catholic Church. And most notably, she served 22 years as a volunteer with Judith Karmen Hospice. Oleta loved gardening, sewing, and doting on her grandchildren. She had great love for her family, and her soul-mate, Bill. Although life presented numerous, and seemingly insurmountable, challenges for Oleta, her friends and family will remember her for her genuine unwavering reply of “I’m fine.”

Memorials in lieu of flowers may be made to the Mother Teresa Ministry at St. Francis Xavier church in Stillwater, Oklahoma.
Read Less

To send flowers to the family or plant a tree in memory of Oleta Fern Moler, please visit our Heartfelt Sympathies Store.

We encourage you to share your most beloved memories of Oleta here, so that the family and other loved ones can always see it. You can upload cherished photographs, or share your favorite stories, and can even comment on those shared by others.

Jeff Nelson and Family, Joe Lamberti and the Merrill Lynch Team, and other have sent flowers to the family of Oleta Fern Moler.
Show you care by sending flowers

Posted Apr 16, 2019 at 09:18pm
Please accept our most heartfelt sympathies for your loss... Our thoughts are with you and your family during this difficult time.

Posted Apr 16, 2019 at 02:50pm
Moler family: Jim (Arnold) and I (Shirley Arnold) met your parents before Billy and Bobby were born. Jim worked with Bill for many, many years for OG&E. They were funny together. Bill supported OU. Jim supported OSU. Bill was Catholic. Jim was Baptist. During their funny conversations, Oleta would just bring in some cold drinks and cookies and smile at both men. Your Mom was such a delight and would help you any way she could. It was nice when I could return the favor. I remember sitting with Billy and Bobby in the hospital while Bill & Oleta's mom were in the same hospital. I thought that was really a tough time for Oleta, but she handled it with grace. Jim and Bill would help each other anytime they needed help, too, but never agreed on religion or the state universities! I can close my eyes and almost hear Oleta's calm and gentle voice. Bill and Oleta were SO proud of their children and grandchildren! God bless and guide their family in the future.
Comment Share
Share via:
TM

Thank you so much you for your kind comments.. I remember fondly Mom & Dad's relationship with your family and other co-workers at OG&E. You will be humored to know that after many years of living in Stillwater, Dad finally accepted Orange Power! Mom was a rock and carried so many hardships with her health with steadfast grace. While we miss them both terribly, we are happy that they are together again and both are free from any the afflictions they suffered here on earth.
RM

Jim and Shirley, thank you so very much for your kind words and wonderful memories. Terry and I laughed thinking about the many times our families would gather together. Whether it was an OG&E Christmas party (Santa was always there) or having homemade ice cream at your place or our home on 80th. I know the truest of friendships were with you both, and for that I'm grateful. I was very fond of you two while growing up and would love to contact you if you're still in Oklahoma. Again, thank you for all that you shared with Mom and Dad, and may God continue to bless you in all that you do.
JT

Joe Lamberti and the Merrill Lynch Team purchased the Gracious Lavender Basket for the family of Oleta Moler. Send Flowers 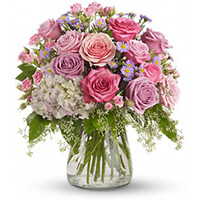 Trina, Jeff, Kathleen, and the CE Team purchased the Your Light Shines for the family of Oleta Moler. Send Flowers